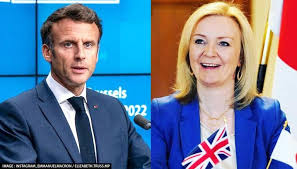 Prime Minister Liz Truss labelled Emmanuel Macron a “friend” as they announced plans to work together at the first meeting of a new political club of nations.

Ms Truss had declined to say whether the French President was a “friend or foe”, during her leadership campaign.

The French President said he hoped for a “new phase” in post-Brexit relations.

The pair agreed to step up cooperation on “ending” small boat crossings in the Channel ahead of a summit in 2023.

Leaders from the EU, the UK, Turkey, Norway and the Balkans met at the first European Political Community in Prague yesterday.

They discussed energy, migration and security, with a particular focus on the war in Ukraine.

The prime minister and Mr Macron released a joint statement promising an “ambitious” package of measures aimed at “ending” small boat crossings on the Channel.