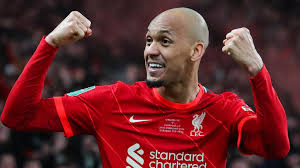 They have been named in the squad that flew to Paris yesterday.

Thiago was a major doubt after suffering an Achilles injury during the 3-1 English Premier League win over Wolves last Sunday.

Fabinho, who had a thigh problem, has not played since the 10th of May.

Both players have been crucial this season as Liverpool won the Carabao Cup and FA Cup and finished one point behind champions Manchester City in the league.