Texas Town to begin burying its children after school shooting 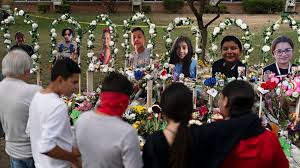 Texas Town to begin burying its children after school shooting

The small Texas town of Uvalde is beginning to bury its children, killed last week in the deadliest school shooting in the United States in a decade.

Funerals are scheduled Tuesday for two 10-year-old girls who were among the 19 students, all aged nine to 11, and two teachers killed when a gunman burst into Robb Elementary School on May 24 and opened fire in a fourth-grade classroom.

According to obituaries on the websites of Uvalde’s two funeral homes, Amerie Jo Garza was sweet, sassy and funny, and loved swimming and drawing; Maite Yuleana Rodriguez was an honour student who loved learning about whales and dolphins and dreamt of becoming a marine biologist.

Amerie’s funeral was set for Tuesday at Uvalde’s Sacred Heart Catholic Church and Maite’s will be in the evening at a Uvalde funeral home.

The small community of about 16,000 people is still reeling in the aftermath of the deadly attack, which has spurred calls across the US for stricter gun control laws, but residents have banded together to support one another.