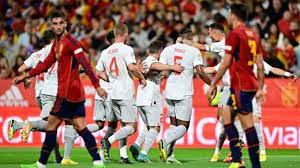 Spain fell to their first home loss in almost four years as Switzerland dealt a blow to their bid to qualify for next year’s Nations League finals thanks to a 2-1 Swiss Victory.

Defeat saw Luis Enrique’s side replaced at the top of Group A2 by Portugal, who they will meet in their winner-takes-all final group match next Tuesday.

Eric Garcia’s own-goal, three minutes after Jordi Alba levelled for Spain in the second half, decided the game.

Manuel Akanji’s 21st-minute header had put Switzerland ahead in Zaragoza.

It is La Roja’s first home defeat in 22 matches across all competitions since losing 3-2 to England in the Nations League in October 2018.

That stood as their only loss in their past 56 competitive home matches, with defeat by Switzerland only their second defeat on home soil since 2003.

While a Spain win today accompanied by defeat for Portugal against the Czech Republic would have sealed top spot for the 2021 runners-up, Spain will now head into their final game two points behind Portugal and requiring all three points to progress.

Switzerland, who picked up their first win against Portugal last time out in June, moved off the bottom of the group after another impressive victory.

Garcia’s own-goal, forced as Breel Embolo attacked a second ball at a corner, saw them leapfrog final opponents the Czech Republic as they bid to avoid relegation.