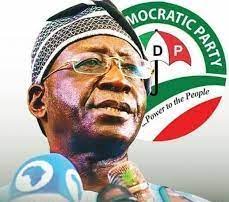 The South-West arm of the Peoples Democratic Party (PDP) has joined the push for the resignation of the National Chairman of the PDP, Iyorchia Ayu.

Notable South-West members of the PDP told Newsmen yesterday that with the All Progressives Congress (APC) picking its Presidential candidate from the South-West in the person of Bola Tinubu, the PDP would also need an influential politician from the region to be the party’s chairman.

There are demands from the camp of Governor Nyesom Wike of Rivers State as well for Ayu to resign as the party’s chairman.

The demand was among the conditions given by Wike who is still said to be aggrieved over Atiku’s refusal to pick him as a running mate.

Already, Wike and Atiku have begun meeting with a view to ensuring that a compromise is reached before the commencement of campaigns next month.

However, it was further learnt that the South-West is also demanding Ayu’s exit as a condition to support the party.

Also speaking to newsmen, a former Deputy National Chairman of the PDP, Chief Bode George, said Ayu must leave immediately in the spirit of fairness.