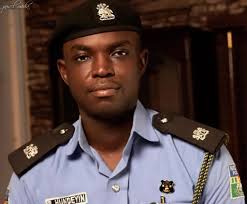 The Police Public Relations Officer of the Lagos State Police Command, Benjamin Hundeyin, has explained why tear gas was shot at the #EndSARS memorial procession by men of the Nigerian Police Force, which took place at the Lekki toll-gate, on yestersday.

Hundeyin explained in an interview on national television that the procession had stopped and traffic was building at the toll-gate.

He said the police had to fire tear gas to disperse the crowd in order to relieve traffic at the spot.

The procession was organised to mark the second anniversary of the lives lost during the #EndSARS protest of Octobor 20, 2020, were security forces allegedly shot at unarmed, peaceful protesters who converged on the toll-gate.

The police had earlier mentioned that as long as the procession did not stop there would not be problems, adding that the agreement was that the protesters would keep moving.

Hundeyin said some trouble makers wanted to breech the peace so the police swung into action.

When the PPRO was asked about the protesters that were locked up in the black maria truck he said they had all been released.