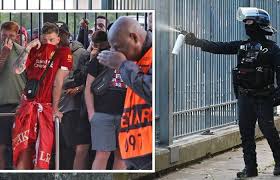 The man in charge of policing the UEFA Champions League final in Paris has apologised for using tear gas against Liverpool fans outside the stadium.

Didier Lallement offered sincere regrets for the trouble and admitted failures in the security operation.

But he also defended his handling of the chaos last month, saying his “red line” was to save lives.

French authorities blamed late arrivals and fake tickets for overcrowding and chaotic scenes before the match.

Liverpool fans, including children were tear-gassed and pepper-sprayed outside the stadium by police ahead of the UEFA Champions League final between Liverpool and Real Madrid on 28 May.

Mr Lallement however
confirmed that as they left the area, some fans were were attacked by 300 to 400 local youths.