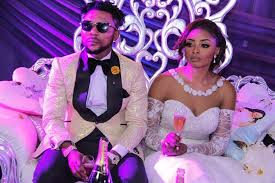 Nabila Fash, wife of singer, Oritsefemi has disclosed that their marriage has packed up.

Nabila who revealed this in an interview with Daddy Freeze, accused Oritsefemi of incessant cheating.

Recall that the couple’s marriage has been mired with allegations of cheating recently with the singer having refuted the claims in the past.

Nabila revealed they are currently going through a divorce process after discovering that the singer had welcomed a child with another woman while they were still married.

According to her, Oritsefemi has two daughters from two different women before they met.

She said the singer had gotten another lady pregnant while they were dating, and while they got married, he welcomed another daughter with the same woman.