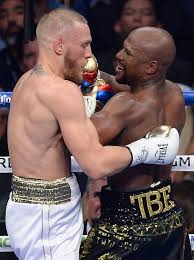 Mayweather knocked out McGregor in the final fight of his professional career in 2017.

Having competed in several exhibitions since retiring, Mayweather says he is in talks to fight McGregor again.

Mayweather suggested Allegiant Stadium, home to the NFL’s Las Vegas Raiders, as a potential venue for his rematch with McGregor.