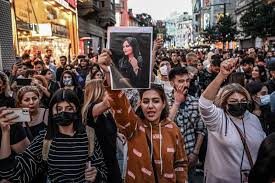 Nine people are now reported to have been killed at protests in Iran sparked by the death of a woman detained for allegedly breaking strict hijab rules.

Among those reported killed is a 16-year-old boy, shot dead when security forces opened fire on protesters.

The unrest has spread to more than 20 major cities, including the capital Tehran.

Videos posted online from today’s unrest showed women waving their headscarves in the air or burning them.

“No to the headscarf, no to the turban, yes to freedom and equality!” protesters were heard chanting at a demonstration in Tehran.

In an address to the UN General Assembly, US President Joe Biden said Americans stood with “the brave women of Iran who right now are demonstrating to secure their basic rights”.

The hard-line Shia Muslim cleric accused them of “double standards”, citing the discovery of unmarked graves of indigenous children in Canada and the treatment of the Palestinian people.