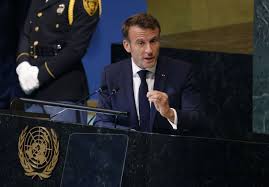 French President Emmanuel Macron has condemned reports of planned referendums in occupied regions of Ukraine and accused Russia of seeking a return to an era of empires and colonies.

Addressing the UN General Assembly in New York, Macron accused Moscow of seeking to create a new order where “those that are strong seek to subjugate those that are weak”.

“What we have seen since 24 February is a return to the age of imperialism,” he said. “France rejects this.”

“Contemporary imperialism is not Western,” Macron went on, while attacking the impact the conflict has had on global food supplies.

“Who’s playing at hegemony today? It is Russia.”

The French president has already dismissed the votes as a “parody”, saying they “will have no legal consequence”.