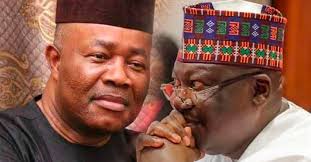 The Independent National Electoral Commission has said that it stands on the election and reports it received from state chapters as regards the primary election conducted in Akwa Ibom North and Yobe North senatorial districts.

The electoral body through a statement signed by its National Commissioner and Chairman, Information and Voter Education Committee, Festus Okoye, advised candidates who were sidelined by the party to seek redress in court against the decision to disqualify them.

While emphasising that the commission is “funtus officio” in the two cases, Okoye said that the attention of the commission had been drawn to speculations circulating online on the outcome of some of the recent primaries conducted by political parties and related issues.

It would be Recalled that Machina has been embattled over the senatorial ticket of the Yobe North district as some powers within the All Progressives Congress (APC) have been dragging the seat with him.