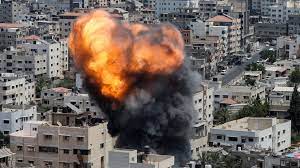 The Palestinian health ministry says 15 Palestinians have been killed in the Gaza Strip where the Israeli military is targeting members of the Palestinian group Islamic Jihad.

A five-year-old child, two women and several PIJ fighters – including leader Tayseer Jabari – are among the dead.Some 300 Palestinian rockets and mortars have been fired at Israel since Friday, an Israeli official said.Israel says it launched the operations due to “immediate threat” from PIJ.

The latest violence is the most serious flare-up between Israel and Gaza since an 11-day conflict in May 2021 left more than 200 Palestinians and a dozen Israelis dead.

The Israeli military is warning this latest operation ,codenamed Breaking Dawn – could last for a week.

It Would Be An Obi’: Ezekwesili Picks LP Candidate Over…