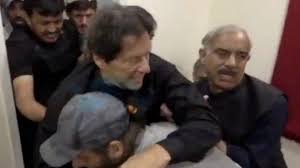 Pakistan’s ousted Prime Minister, Imran Khan, has survived a gun attack on his convoy while holding a protest march in the eastern city of Wazirabad.

He was wounded in the leg when a burst of gunfire hit his vehicle, while one person was killed and at least five others were injured.

There was no immediate official comment on the motive for the attack which allies say was an assassination bid.

The protest march had been called to demand early elections.

Mr Khan,was leading the march, which was meant to end in the capital Islamabad.

The former international cricket star turned politician was seen being taken to a hospital in Lahore. A party spokesman said he had been hit in the shin.

He was in a stable condition, said an official from his PTI party, provincial health minister Yasmeen Rashid.

Police released a video confession of a man they arrested who they say had attempted to kill the former prime minister.