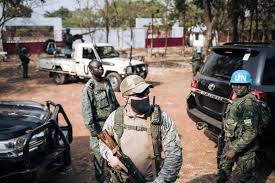 Russian mercenaries have been accused of summarily executing, torturing and beating civilians in the Central African Republic (CAR).
Witnesses told Human Rights Watch (HRW) that in one incident last July, Russian-speaking fighters shot dead at least 12 unarmed men at a roadblock.
Most victims were put in a shallow hole by the road near Bossangoa, they said.
CAR’s government denies hiring mercenaries from the private Russian Wagner Group to fight rebels.
UN experts have also accused Russian mercenaries of committing systematic and grave human rights violations in CAR, which is one of the world’s poorest countries but is rich in diamonds, gold and uranium.
The Wagner Group is widely reported to have deployed forces elsewhere in Africa – in Mali and Libya – and has played a major role in the conflicts in Syria and Ukraine.
Last month, suspected Russian mercenaries were among those accused in a HRW report of executing about 300 people in central Mali.