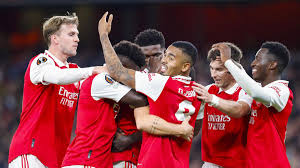 Granit Xhaka scored the winner as Arsenal edged closer to the last 16 of the Europa League with a narrow 1-0 win over PSV Eindhoven at Emirates Stadium.

The result leaves Mikel Arteta’s side five points clear at the top of Group A after they maintained their 100% record.

It was also the Gunners’ eighth successive victory in all competitions and they more than merited it in the rearranged contest that was originally scheduled to be played on 15 September but was postponed because of “severe limitations on police resources” following the death of Queen Elizabeth II.

Gabriel Jesus and Bukayo Saka had the pick of Arsenal’s opportunities but some errant finishing and the performance of PSV’s Argentine goalkeeper Walter Benitez made for a nervy evening.

However, Swiss international Xhaka drove a low effort into the bottom left corner from Takehiro Tomiyasu’s cross to finally break the visitor’s resistance.

Arsenal will confirm their progression to the knockout stage as group winners if they claim at least a point in the reverse fixture in the Netherlands next week.