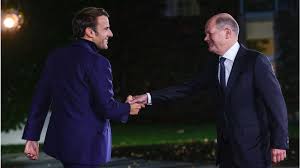 France has sent gas to Germany for the first time in “European solidarity” amid increasing energy pressures.

The gas, delivered via a pipeline, is part of a deal between the countries to ease energy shortfalls after Russian turned off the taps to Europe.

Though the new flow is less than 2% of Germany’s daily needs, it is welcome as Berlin battles to diversify its energy.

Russia has been accused of using gas supplies as a weapon against the West since the invasion of Ukraine.

French grid operator, GRTgaz, said it would initially deliver 31 gigawatt hours (GWh) per day, via a pipeline from the French border village of Obergailbach.

The maximum daily capacity of the new gas flow is 100 GWh, it added in a statement.

Last month, in the energy solidarity deal, Germany pledged to provide additional electricity to France when needed, and in exchange France agreed to help Germany with gas supplies.

France is less affected by Russia turning off the gas taps because most of its energy needs are fulfilled by Norway and through liquified natural gas supplies.