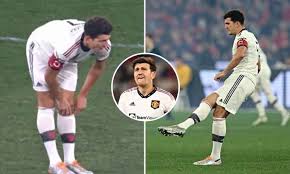 Manchester United captain Harry Maguire was booed by some fans as they beat Crystal Palace 3-1 in a pre-season friendly in Melbourne.

Maguire has been confirmed as skipper for this season by new manager Erik ten Hag, who plans to partner the England international in central defence with 57 Million Pounds new signing Lisandro Martinez.

However, some supporters in the 76,499 crowd at the Melbourne Cricket Ground made their feelings known during 10-man United’s victory.

Ten Hag’s side have been enjoying huge backing in Australia, including a small number who have followed the team from the UK.