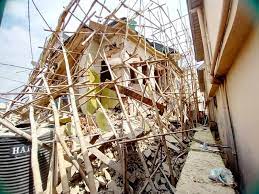 Two persons have been reportedly killed in a building collapse in Oraifite, Ekwusigo Local Government Area of Anambra State.

It was gathered that the two-storey building, under construction, caved in when its second floor, which had a defect, was undergoing some reconstruction works.

Although, the detail of the incident was still sketchy, but the deceased were said to be construction workers on the site.

According to a source, the incident happened in Ibolo area of the community.

As of the time of filing this report, it was also gathered that one of the victims had been removed from the debris, while the other was still yet to be found.

The State Police Spokesman, DSP Tochukwu Ikenga, could not be reached for reaction as he did not take a call placed across on his telephone line.