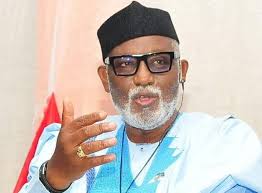 Akeredolu reportedly attended the inauguration on the invitation of the Osun State Governor, Mr Gboyega Oyetola.

However, in a statement issued by the state Publicity Secretary of the PDP, Mr Kennedy Peretei, the opposition party described the action of Akeredolu as shameful as Ondo had no flyover.

However, Akeredolu, in a statement issued by his Chief Press Secretary, Mr Richard Olatunde, said Ondo PDP was “diving into self-ridicule, and had no respect for human lives.”

The PDP statement was titled ‘Akeredolu’s misrule in Ondo State (21): shamelessly commissions flyover in Osogbo when there is none in Akure.’

On the other hand, the governor, in his statement titled, ‘Ondo PDP diving into self-ridicule, has no respect for human lives’ , said, It has become crystal clear that the PDP in Ondo State has no iota of respect for human lives stressing that he opposition party is prepared, out of desperation, to play politics with the lives of the people and demean any effort of the present administration in the state to save lives.